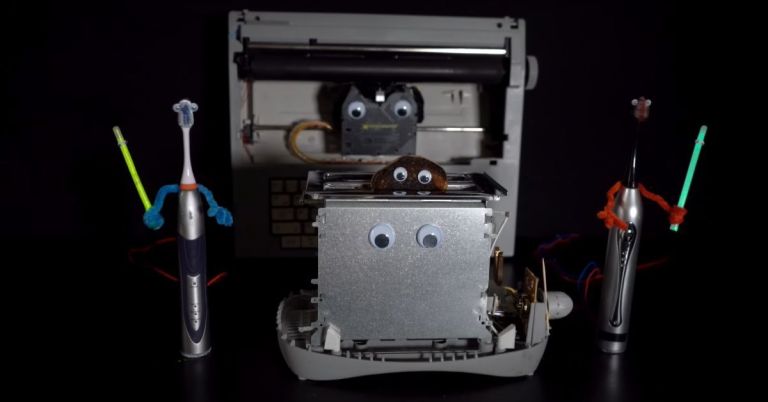 I think it might be the pinacol of geekdom to make everyday objects play your favorite geeky songs when they obviously weren’t meant to be used as a musical instrument.  I’ve posted a number of such geeky musical creations in the past so when I saw this one, I knew I had to share it with you guys!  I present to you guys, a toaster performing the Imperial March from Star Wars.  I call it the Imperial March Toaster!

Ok, so maybe I can’t name it the Imperial March Toaster since this wasn’t my creation but I think the name still fits.  This awesome musical kitchen appliance creation comes to us from the infamous YouTuber Device Orchestra.  If that name sounds familiar its because I have featured some of their crazy musical creations here on GGN in the past such as the Zelda theme played on toothbrushes.

In this video, the Imperial March Toaster is accompanied by a couple of musical electric toothbrushes holding glowsticks (meant to look like lightsabers) and a typewriter. The result is pretty cool!  The first two minutes of the video is the explanation of how exactly this musical appliance mod was pulled off followed by the Star Wars Imperial March being performed by the Toaster, typewriter and electric toothbrushes.

I would put this up there as being every bit as awesome as all the music I have posted in the past being played with floppy disk drives.

Do you have any geeky musical hobbies like this?  I would love to hear about them in the comments below!  Bonus points for sharing a video of it!

Enjoy the video below!

Share this with any Star Wars fans and toast lovers you know!  Make sure to go join our awesome community of geeks on the Global Geek News Facebook page and follow me on Twitter!