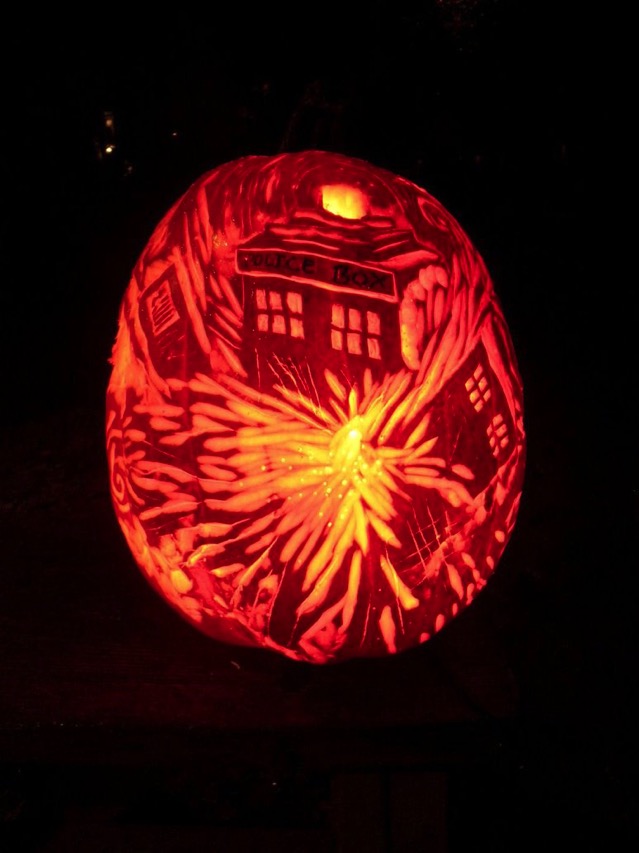 With Halloween just over two weeks away, its that time of year again where I find some incredible geeky pumpkin carvings to share with you all!  This morning I happened to stumble across this fantastic exploding TARDIS pumpkin carving that Doctor Who fans are sure to fall in love with!  Its good enough to make you wish for a Doctor Who Halloween special instead of a Christmas special!

I’ve posted some pretty awesome Doctor Who inspired pumpkin carvings in the past like this Weeping Angel pumpkin carving, this Dalek and Cyberman pumpkin carving and this mind blowing Dalek Halloween pumpkin.  This exploding TARDIS pumpkin is a great addition to all of those other fantastic posts!

As for some of the details about this exploding TARDIS pumpkin carving, it was created by DeviantART user Doodled93.  It took him approximately 6 hours to create (wow, thats a lot of time to spend carving a pumpkin!) using a variety of wood carving tools.  Whether a sonic screwdriver was also used, I have no idea but the amount of work they put in is quite spectacular and I think the incredibly detailed results speak for themselves!

I say if you are going to make a good pumpkin carving, do something like this rather than just the basic jack-o-lantern that everybody does.  You might not have wood carving tools but I’m sure if you use the search on the right to look for the pumpkin carvings we have posted in the past, it should give you some ideas and some inspiration.