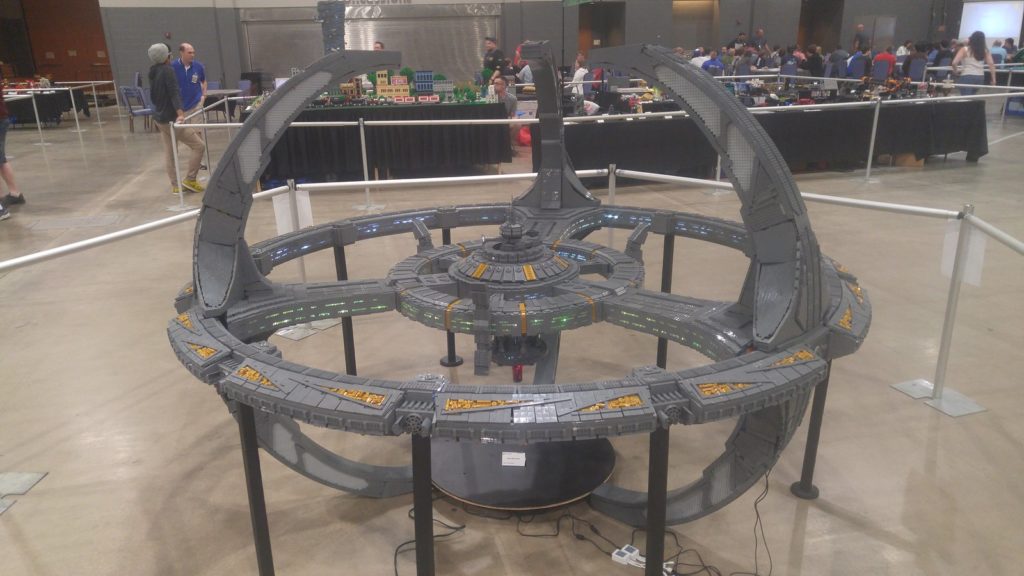 I’m sure I’ve said it before but Star Trek: Deep Space Nine is not only my favorite Star Trek series but my all-time favorite television show period.  20 Years later, I’m still watching it up to 6 nights a week because its just that good!  Anyway, while I could go on for my love for the show for hours, thats not why you clicked on this post.  The reason you are here is for the amazing 1:600 scale LEGO Deep Space Nine made from 70,000 LEGO bricks!

Reddit user brickfrenzy posted this picture of his amazing LEGO Deep Space Nine build that he recently displayed at Brickworld Chicago at the Schaumburg Convention Center.  This amazing LEGO DS9 build is 1:600 scale, made from over 70,000 LEGO bricks and even has internal lighting!  Apparently its not quite finished yet after two years worth of work but it looks pretty spectacular to me!  Its 8 feet in diameter and supported by a steel and aluminum framework to support the weight.  As one can imagine, transporting something like this would be a bit of a challenge but apparently it breaks down into 20 pieces to make it a bit easier to transport it.

For those who would like the opportunity to check out this incredible built in person, they said they will be displaying it at the upcoming Brickfair Virginia in August.

Of all the epic LEGO builds I have posted over the years including the recent LEGO brick McLaren Senna made from over 400,000 bricks, this is by far my absolute favorite LEGO build.  I wish I could have this in my living room!

What is the coolest thing you have built with LEGO bricks?  Let me know in the comments below and feel free to share some pictures as well as I would love to see your cool builds!