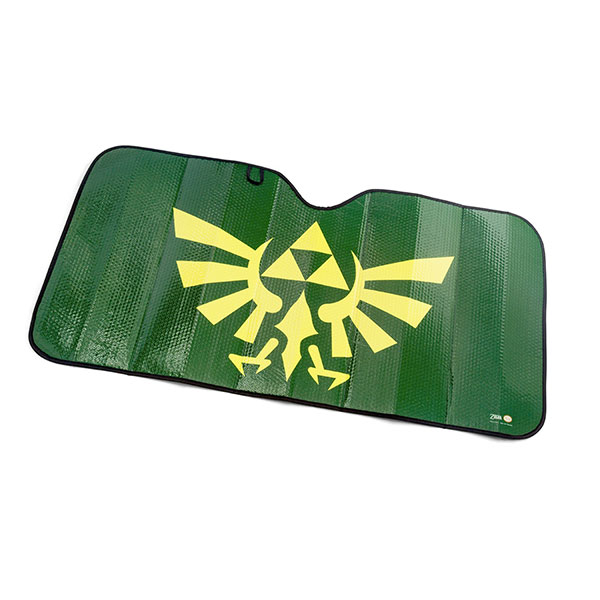 Summer will be here soon which means one thing, your vehicle will turn into an oven!  However, Zelda fans can help keep thier car or truck a little cooler while it sits in the summer sun with this awesome Legend of Zelda Hylian crest sunshade!

Where I live, many days during the summer tend to be in the triple digits and you can imagine just how hot my car gets on those hot summer days.  Its like literally going to sit in an oven until the A/C starts working.  Most of the time I try to remember to at least keep my windows cracked which does help quite a bit but there are times I forget and always regret it.  However, I know of a number of people who use a different strategy and stick one of these sunshades in their windshield which helps keep the sun from warming up their car and after stumbling across this Legend of Zelda Hylian Crest sunshade, I think its an idea I should adopt and so should you!

This awesome Legend of Zelda Hylian Crest sunshade is available from the awesome people over at ThinkGeek for just $14.99!  That seems like a heck of a bargain if it means keeping your car cooler in the summer!  Not only that but keeping the sun from beating down on the inside of your car helps protect and prolong the life of the interior plus whatever stuff you happen to be hauling around in your car.  Seriously, if you are a Zelda fan, picking up one of these Legend of Zelda Hylian Crest sunshades is just common sense!

And it makes even more sense if you happen to drive a Legend of Zelda semi.