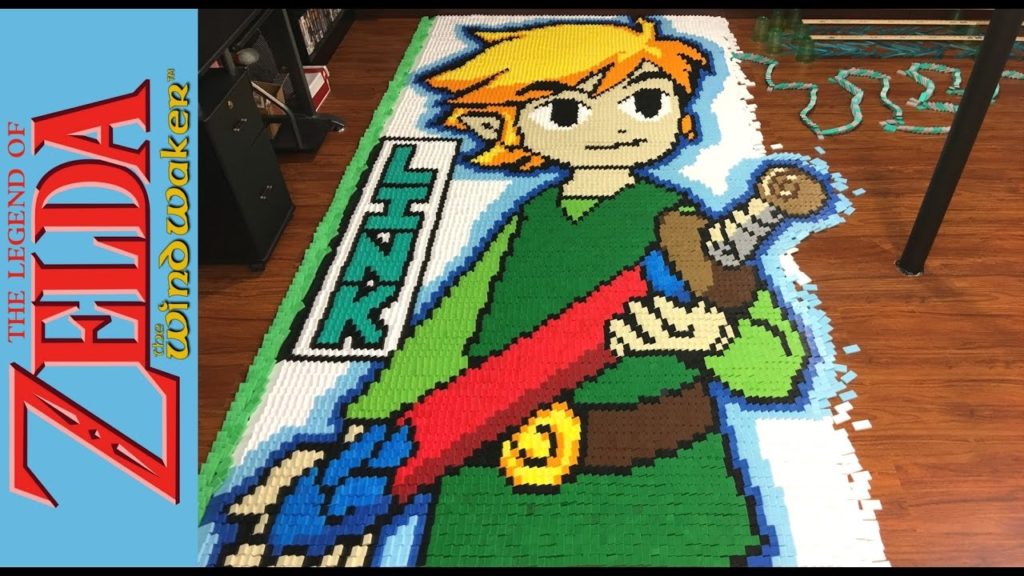 It really is nice to see that even though most people have their fun in the digital world now, there are some people that still have an obsession for old toys like dominoes and that they build incredible creations with them.  In this particular case, a domino legend has returned to create a Legend of Zelda: Wind Waker dominoes run made with 78,175 dominoes!

Not too long ago I posted a video created by TheDominoKing who created a Super Mario World dominoes run with 81,032 dominoes and it was really something quite spectacular!  Well, he is at it again and this time the Legend of Zelda franchise as his target!  He chose this particular Zelda game because the Legend of Zelda: Wind Waker was the first Zelda game he played and he tried to highlight the main characters and some of the iconic items in the Zelda world like rupees.

This Legend of Zelda: Wind Waker dominoes build uses 78,175 pieces and took about 5 weeks to make.  Of course while the video makes it look like one giant run of dominoes, each screen was made independently and stitched together to make it look and sound like one continuous run which makes it seem much more impressive yet not requiring the massive amount of space that nearly 80,000 dominoes takes up.  I’d say that is definitely the way to do it too because while you may have to fix a couple thousand bricks if you accidentally knock one over, thats better than having to set back up up over 78,000 domino bricks.  That would make anyone want to cry!

Between the Super Mario World domino run video and this Legend of Zelda: Wind Waker dominoes video, I feel like Nintendo really needs to hire this guy to make some sweet commercials for them because I think they would turn out great.  However, I doubt it will happen considering how much Nintendo seems to hate anything made by their fans.