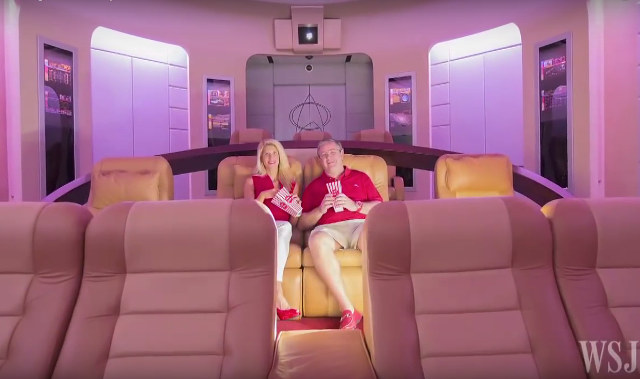 If I ever become filthy rich, I’ve long thought it would be really cool to build myself a nice home theater.  I can’t say I watch a ton of movies but if I had a nice home theater I might start or at least have an incredible room to play video games in.  Of course if I want to build anything like this $1.5 million Star Trek home theater, I am going to have to win the lottery first!

In the past I posted a pretty mind blowing Star Trek themed home theater, but this $1.5 million Star Trek home theater blows it right out of the sky!

The filthy rich couple whose home this $1.5 million Star Trek home theater resides in is that of Marc and Jennifer Bell.  Between all of their screen worn items like Leonard Nimoy’s Spock Ears, several of the jumpsuits, the Star Trek: The Next Generation Enterprise themed home theater and a Star Trek themed candy bar and lounge area, they have created the ultimate nerdvana for Star Trek fans in their home.  The memorabilia alone like Spock’s ears and other costumes and things they figure are worth over $1 million alone!

This insane $1.5 million Star Trek home theater has 11 insanely comfortable looking custom leather chairs, 8 of which are recliners.  The theaters door’s are also made to look like the turbolift doors.  And if that wasn’t enough, they plan to build an even bigger Star Trek home theater!  This one took them 4 years to build so I can only imagine how much time it would take to build and even bigger one.

If I ever become rich, this is exactly how I plan to spend my fortune!  Although in my case I’m thinking I would rather do a Star Trek Home Theater that looks a little more like the USS Defiant or maybe Voyager instead of the Enterprise.  Now, who wants to help me become rich so I can make this dream happen?  Anybody?

Check out the video below for the amazing grand tour!