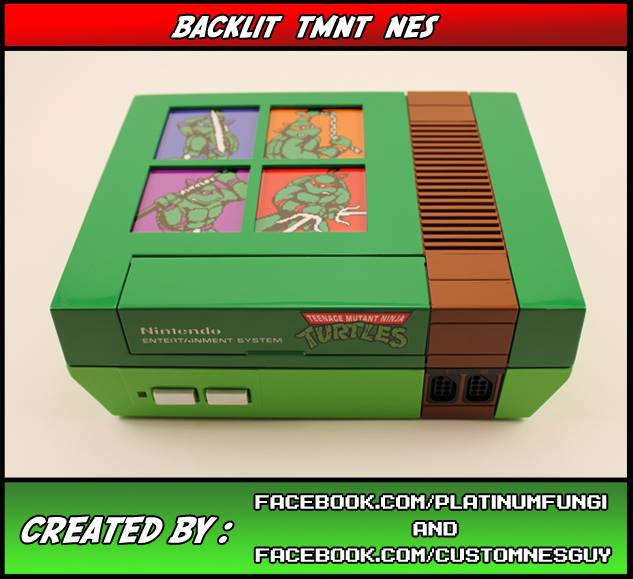 With all of the recent excitement around the PlayStation 4 and the Xbox One, it is easy to forget about all of the fun that can still be had with Nintendo’s old NES console.  Even to this day I am still buying games for it because even though it is older than I am, there is still a lot of enjoyment to be had.  Just last week I bought Dick Tracy for the NES because I remember it being a great game as a kid and I want to relive those memories.

Well, speaking of great NES memories, I think my all time favorite NES games were the Teenage Mutant Ninja Turtles games, so when I saw this incredible TMNT NES console mod, you can imagine just how excited I got!

Ryan Fitzpatrick, aka Platinumfungi is back to his old tricks and is the creator of this incredible Teenage Mutant Ninja Turtles NES mod.  If his name sounds familiar, it should because he is the creator of many of the NES mods I have posted in the past such as the back-lit Mega Man 2 NES mod and the .

Like his previous console mods, this one is also on sale on Ebay until December 29th, 2013.  A word of warning, you are going to need really deep pockets if you plan on bidding on it though because the auction is currently sitting at $1,275 with two days to go.  I would kill to have this Teenage Mutant Ninja Turtle NES but that is way out of my price range.  Ironically, Ryan says he can’t even afford his own NES mods!

If the pictures below just aren’t enough for you, you can check out the entire gallery over on Facebook.