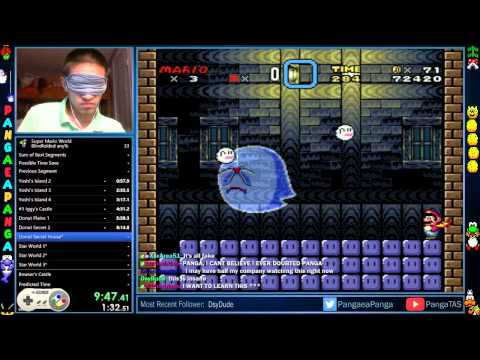 In my 26+ years of gaming, I have seen some pretty impressive things done and I have a feather or two in my own cap as well but a blindfolded Super Mario World speed run is one of the most impressive accomplishments I have seen in a very long time.  Of course I shouldn’t be too surprised that this impressive feat was done by none other than Super Mario Maker legend PangaeaPanga, the creator of virtually all of those impossibly hard levels you have seen on YouTube that have most people rage quitting almost instantly.  And not to brag, but I have beat a number of them.  Ok, maybe I’m bragging a little bit but I’m sure I’ll never be able to beat Super Mario World blindfolded like Panga can!

There are few people that have better timing in Super Mario World than PangaeaPanga or Panga as most people call him and this blindfolded speed run of Super Mario World is a fantastic example of it.  There are some levels I could play in my sleep but not to this extent!  I can’t even fathom knowing the timings of a game so well that you can beat it on that and audio cues alone.

If you are impressed by his incredible Super Mario World blindfolded speedrun skills, click through the video and check out his YouTube channel where he has videos of all his Super Mario Maker levels posted which are not only worth checking out, they might just give you an anxiety attack watching them because they are seriously that hard!  Oh, and if you happen to beat any of them, let me know about your accomplishment in the comments below!

Have you ever tried to play a video game blindfolded?  How did it turn out?  I want to hear your stories too!