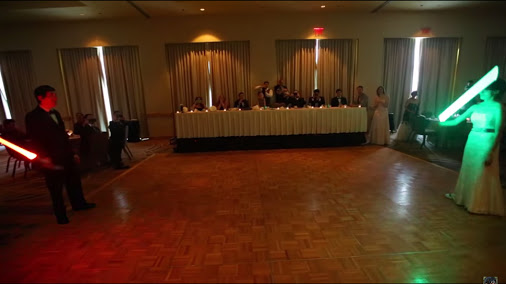 In the past, I have featured a number of really geeky weddings which typically feature really geeky cakes and cosplay, but this is the first time I have ever seen one that replaces a bride and groom’s first dance with a lightsaber battle.

Its not quite as intense of a battle as one might hope but I guess trying to kill your spouse with a lightsaber during the wedding reception isn’t the best idea. Still, it is impossible not to smile at a couple’s first lightsaber battle as husband and wife with Star Wars music playing in the background.  This has inspired me to expand on my idea of a traditional Klingon wedding (should I ever find somebody interested in marrying me) with a Bat’leth battle instead of a first dance.  However, hopefully I won’t have some guy yell HADOUKEN in the background at the end like happened in this video.  On second thought, that is exactly what I want to happen!

What I really want to know now is if they are wearing wedding rings like these Star Wars wedding rings I posted a couple of years ago.

Congrats to Robert and Rebecca and may the Force be with you!