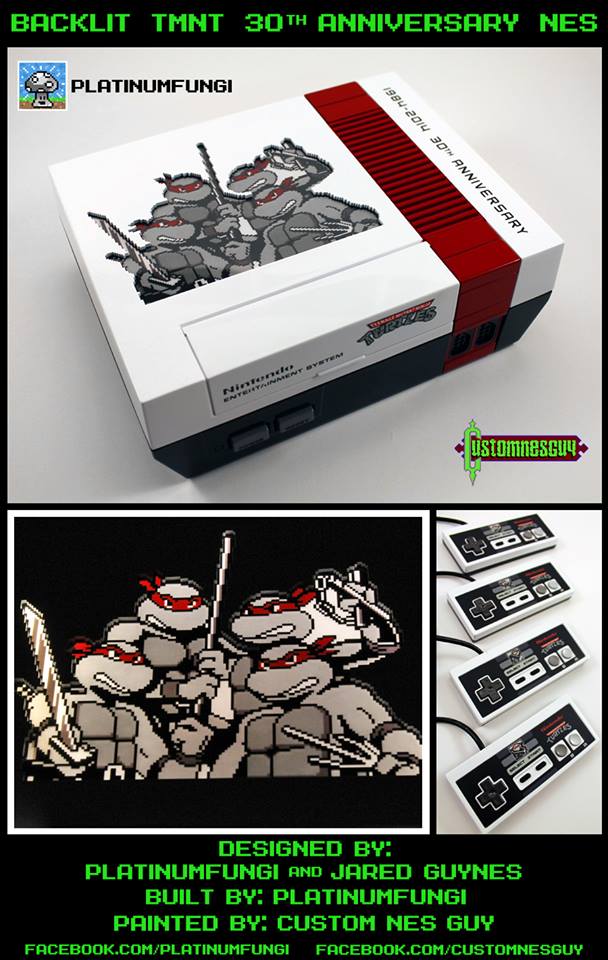 This past weekend, I had the opportunity to go see the new Teenage Mutant Ninja Turtles movie but between my hatred of Michael Bay, the various reboot ideas and story changes and the less than positive reviews I have been reading on just about every geek site I trust, I decided to go see Guardians of the Galaxy instead (great movie).  While I am certainly up for some new TMNT (besides the new cartoon which I have enjoyed), there is nothing quite like the old TMNT.

Speaking of the old Teenage Mutant Ninja Turtles, my favorite NES console modder, Platinumfungi has been up to his old tricks and this time he has made (with the help of Jared Guynes and Custom NES Guy), an amazing custom Teenage Mutant Ninja Turtles 30th Anniversary NES.  Like his many previous designs which I have written about, this one features a cool back-lit image on top and it sports a really cool custom paint job.  This also includes 4 custom NES controllers with the image of one of the turtles on each although you really can’t tell it in the picture below.

This radical TMNT NES is a tribute to the old black and white comic and it took weeks of planning, over 500 messages between the guys and over 150 hours of labor to complete.  Talk about a labor of love!

Share this with any Teenage Mutant Ninja Turtles fans you know!   Also, if you have a Kindle, subscribe to Global Geek News on the Kindle!