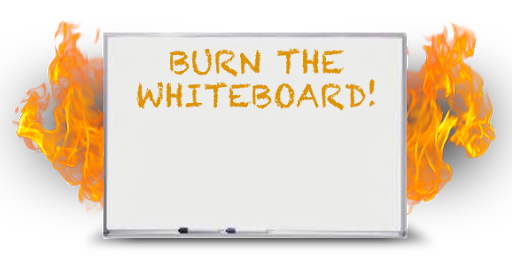 Today’s post is one of those incredibly rare departures from my usual posting of really cool, geeky things that I come across.  I prefer to keep things happy and upbeat on here but once in a really great while, something has me so annoyed that I have to make an exception and go on a rant.  This is one of those posts.  This particular rant is in regards to the whiteboard questions that you often encounter in developer interviews which need to die.

For those of you that don’t follow me on Twitter, let me get you caught up a bit.  Two weeks ago, I was let go from my developer job with the State of Colorado (which is a rant in itself but probably not one I will be writing about but if anybody wants to know what happened, I have no problem telling them and I am glad to be out of there).  Since then, I have been putting in applications for every developer job I come across that is looking for skills that at least partially match with mine (.NET and Android development primarily although I have skills in other things).  And with the interviews I’ve had so far, it seems there is still one rather common interview practice that some companies use which needs to die.  Thankfully not all companies still use this practice but enough do that it makes me want to pull whats left of my hair out.

What is this interview practice that needs to go away?  Those ridiculous whiteboard brainteaser problems.

I’m sure pretty much every developer has encountered them in interviews at some point.  Questions they give you and want you to solve on the spot, usually dealing with some sort of string manipulation that you have never even imagined how to do before.  Over the years I’ve encountered some that I figured out fairly easily like the time I interviewed for an SDET 3 position at Microsoft and others that I couldn’t even figure out what they were asking.  But they all have one thing in common, they have zero relevance to anything you will actually be doing on the job.  And that is why this practice needs to die.

If I’m interviewing for a job that is building a web applications in Microsoft’s new .NET Core Blazor framework for example, asking me to develop my own compression algorithm for the most efficient data storage is completely irrelevant to the job and serves no other purpose than to give the interviewer a sense of superiority when the interviewee struggles to do something they have never done before.  It has nothing to do with the technology the job requires and nothing to do with what the job even does.  It is a completely useless question that is a total waste of time outside of something like coding competitions.

Instead of asking questions of somebody just to make yourself seem smart, how about asking questions of the interviewees skills as they directly relate to the job.  For example, tell the person you are interviewing where your team is in the project and what they are about to start doing.  Tell them there are multiple ideas on how to approach the problem and they are trying to decide how best to tackle it.  Ask the interviewee how they would approach and solve the problem.  Real world scenarios like that will give you a much better picture of how somebody will do in the job and if they are right for it.  Give them a chance to show you how they can take their experience and apply it to your circumstances rather than give them brainteasers to figure out.

I’ve encountered developers that were great with brainteasers like often gets asked in interview scenarios but when it comes to the actual job, they can barely manage to write a Hello World app.  Is this the kind of person that you want to pay a six figure salary?  I don’t think so!

So this is my call to the software industry to stop giving bogus whiteboard brainteaser problems in developer interviews and instead ask questions that will give you a real idea of what the person’s development skills are like as they relate to the position you are hiring for.  Asking irrelevant questions wastes both your time and the candidates so just stop it!

With all of that said, if anybody is looking for a developer with skills in .NET or Android development (among other things), feel free to shoot me an e-mail at [email protected] however I promise that if you ask me one of those irrelevant brainteaser whiteboard questions, I will walk out on the interview.

And now back to your regularly scheduled geeky fun posts!