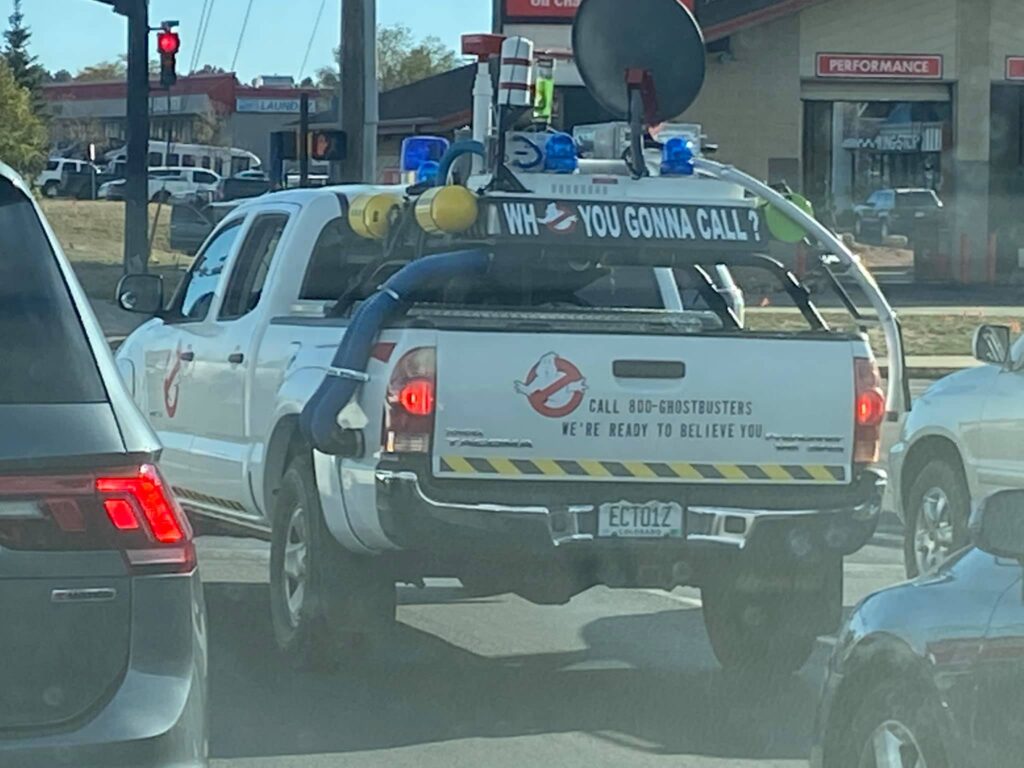 Once in a while you happen to get lucky and spot something really cool driving down the road next to you.  Maybe its a really expensive super car or perhaps the Weinermobile.  The coolest thing I’ve spotted was probably a pickup with an amazing God of War Kratos painting on the tailgate.  However, one lucky person got to see this amazing Ghostbusters truck pull up next to them at a light!

Over the weekend I was mindlessly scrolling through Facebook when I happened to come across a picture posted to a local group dedicated showing the horrible drivers that live in this part of Colorado (719 Can’t Drive is the group name).  However, instead of the usual posts showing somebody parking like an asshat, a user named Brian Schaaf posted this awesome Ghostbusters truck photo that he pulled up next to at a stop light in Colorado Springs.

There were several people in the comments that have seen or know the guy that owns this amazing Ghostbusters truck although he was never named by anybody for me to give them credit.  So if you happen to know how they are, let me know in the comments below so they can get the proper credit for having such an awesome pickup!  They people that knew him or had at least encountered him said he is a great guy though and that is definitely nice to hear!

Judging by the license plate, this Ecto-1 pickup is known as the Ecto-1Z.  My guess would be that somebody else already has the Ecto-1 licence plate number so this was the next best thing.  Its definitely fitting for this truck though!  I hope that one day during one of my trips to Colorado Springs I will get lucky enough to spot this Ghostbusters truck in person!

Have you seen any really geeky vehicles while you were out driving around?  If so, share stories and pictures in the comments below!  And if you want to see another geeky vehicle, check out the Super Mario SUV I have posted about in the past.

Share this with any Ghostbusters fans you know!  Make sure to join our amazing community of fellow geeks on the Global Geek News Facebook page and follow me on Twitch as I am trying to get back into streaming.