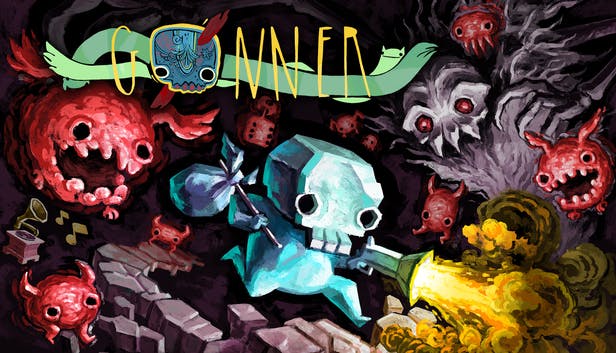 With all of the games that end up being free these days, I honestly couldn’t tell you the last time I bought a game.  I have such a backlog of games to play that I probably don’t need to ever buy another game, especially when games keep showing up for free.  Speaking of free games, I have another one for you guys today and this one is called GoNNER.

If you are like me, you have probably never heard of this game before.  So I will let a bit of the description from the game’s product page tell you about it and then I will post the gameplay trailer down below.

GoNNER is a tough as hell score-based procedurally-generated platformer with roguelike elements. GoNNER is also a story about friendship between Ikk, Death, and a space whale named Sally.

It looks like the game has some visual charm to it and from the comments I read on Reddit, it apparently has a really killer soundtrack which is always a massive plus in my book!  It sounds a bit on the really challenging side though so hopefully you have some determination!  If you care about critic scores, it has a 79 on Metacritic.

So where can you pick up GoNNER for free?  You can get GoNNER for free on the Epic Games Store right now and the giveaway goes until 3/12/20.  Normally it costs $9.99.

If this looks like a challenge that you are up to, grab it before its gone!

And if you have some PC gamer friends that you think might be up to the challenge, send this post along to them as well!  Don’t forget to go join our awesome community of fellow geeks on the Global Geek News Facebook page!  We like to have a good time!

Oh, and if you are looking for a different type of game that is free at the same time as this one, check out my post on Offworld Trading Company that I posted just before this one.

Have you played this game?  Let others know what you think of it in the comments below.