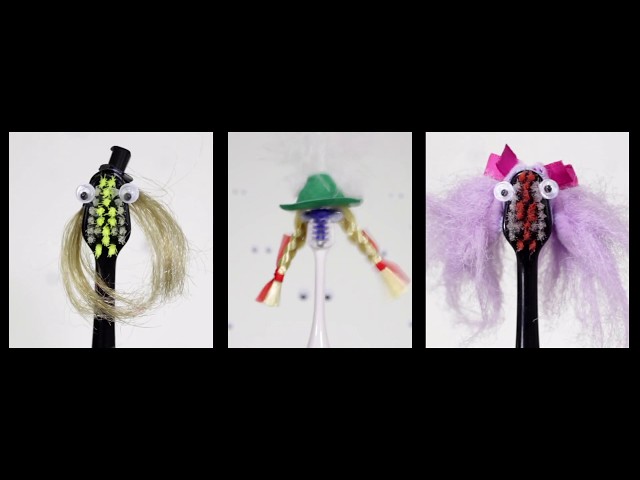 Its always interesting to see what sort of things people can turn into musical instruments.  In the past I have posted a bunch of videos of things like floppy drives, hard drives and other random things playing iconic music like the theme music go Ghostbusters (just search ‘floppy drive music’ on the right and I’m sure you will find them all) but today I bring you electric toothbrushes and instruments!  Today I bring you the classic NES Legend of Zelda theme played on toothbrushes.  Electric toothbrushes with hats, wigs and googly eyes to be more precise!

The YouTube channel Device Orchestra made this awesome and somewhat hilarious video with three electric toothbrushes apparently using there various power settings to play the them from the classic NES game, Legend of Zelda.  That is cool enough on its own but to put some wigs, hats and googly eyes on the toothbrushes makes this hilarious!  You can’t help but laugh at googly eyes!

I know that some people use electric toothbrushes for some…um… other things besides their intended use but to see them used as musical instruments is pretty cool!  I never would have thought them to be something you could make music with.

Make sure to share this post of this Legend of Zelda theme played on toothbrushes with any gamers you know, especially if they are big Zelda fans!  Don’t forget to like Global Geek News on Facebook too where I share a lot more stuff than I do on here since I don’t always have time to make bigger posts like this one.

Have you made any geeky music videos like the one below out of unusual objects like toothbrushes?  If so, I want to see them in the comments below and it might just get you featured here on Global Geek News!