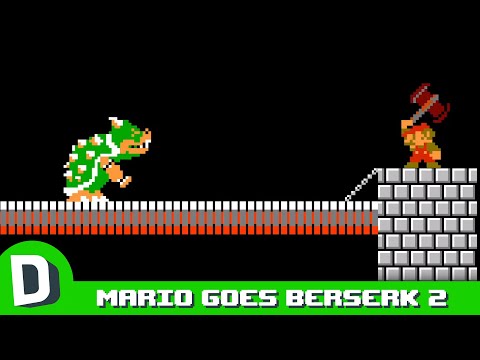 Those that have been around for a long time know that I love the Dorkly Bits cartoons from the awesome folks over at Dorkly.  They are hilarious and take classic video game characters in directions their creators definitely never intended.  In this case, the NES classic Super Mario Bros is made into a rather hilarious video where Mario goes berserk (with kindness).

Is it just me or does anybody think it would be entertaining to have a much more violent Mario like the original video?  I’m not necessarily saying Mario should be really bloody, I’m just saying I like the idea of using a piranha plant as an Indiana Jones style whip to strangle the enemies.  The world could use an M rated Mario game!  And admit it, you would love to see Princess Peach in a bikini too!  Don’t try to hide it!  I can read your minds!

Please share this with any Super Mario Bros fans you know and just gamers with a sense of humor in general.  And make sure to take a second to go Like Global Geek News on Facebook as I share a lot more hilarious stuff on there than ever makes the website here.

Are there any funny video series like these that you enjoy and think I should check out?  If so, let me know about them in the comments below!

And of course the original Mario Goes Berserk video!