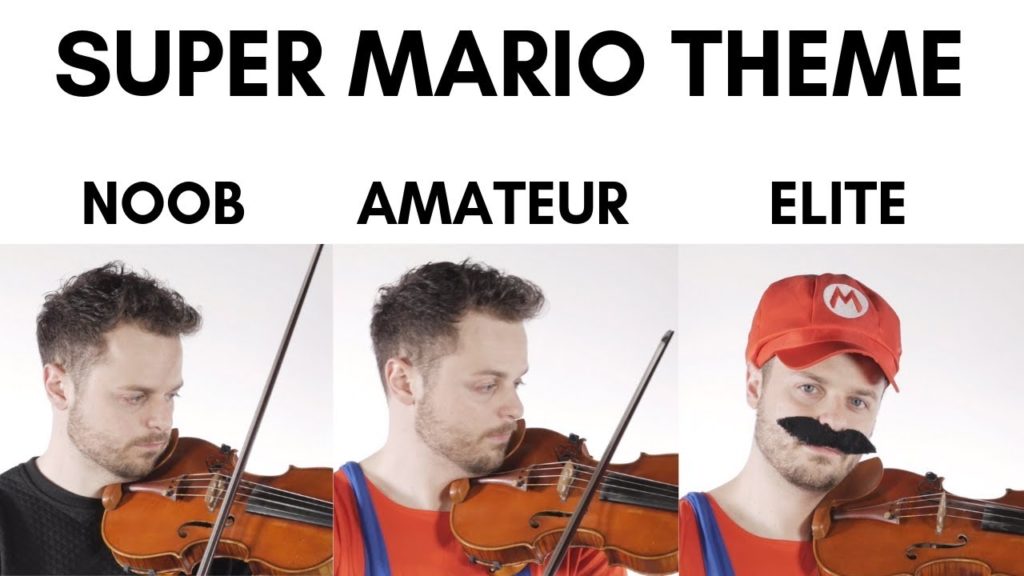 I was too young to remember my first video game but considering I got my NES on my 2nd birthday (and yes it still works although it hasn’t been touched in years), I think there is a pretty good chance that the first video game I have ever played was Super Mario Bros.  Whether it was the first or not, its safe to say that I have spent a lot of hours playing the game as I still play it regularly on my Nintendo 3DS.  So, when I saw this video of the Super Mario Bros theme played on violin at four different skill levels, I thought it was awesome enough that I had to share.

The video below shows musician Rob Landes playing the Super Mario Bros theme on violin at four different skill levels.  While the elite skill level is obviously going to be the most impressive as he includes sound effects from playing the game, his playing as a noob, amateur and hardcore are all pretty cool too!  All of the modes are definitely better than I could do but then again I have never touched a violin much less played one.  They look like they would be fun to break over someones head though.  Sorry, my inner professional wrestler came out for a second.  Anyway…

With awesome videos like this, I highly recommend going and subscribing to Rob’s channel!

If you have any videos of you playing some video game music, feel free to link us to them in the comments below and we might just feature you on Global Geek News as well!

Make sure to share this with all of your Mario loving gamer friends!  And make sure to go Like Global Geek News on Facebook to see the other stuff we share that doesn’t make it to the blog.  That said, enjoy this awesome video of the Super Mario Bros theme played on violin at four different skill levels!