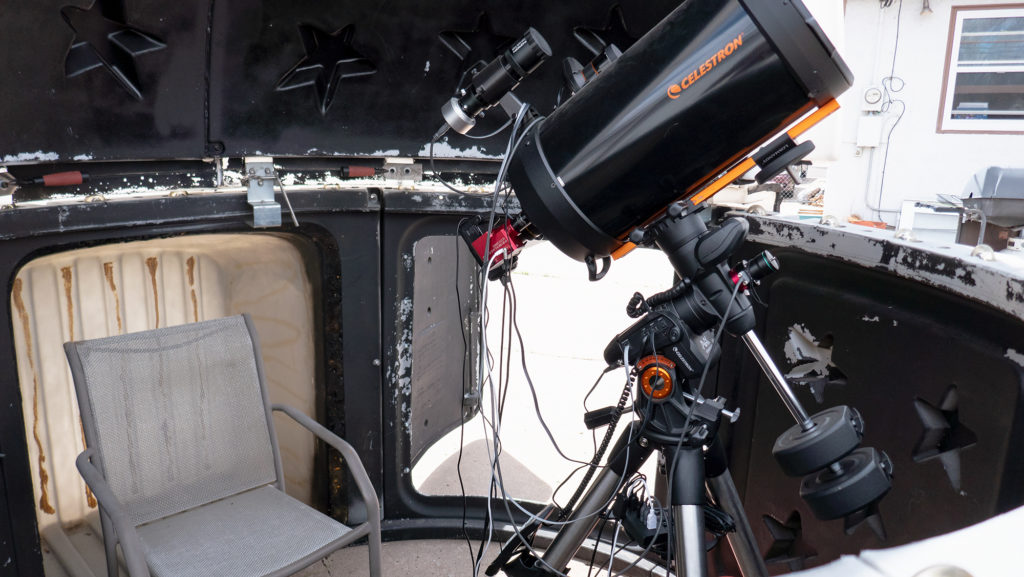 With my astrophotography posts on here as well as Facebook, Twitter, Instagram, Discord, Reddit and other places, I always get questions about my telescope setup that I use for my astrophotos.  So, I decided to write a post that I will hopefully keep updated with any new changes to my setup that I can point people to that has all of the details of my telescope setup for astrophotography.

Before I get started with talking about all of my equipment individually, I thought it would be best to provide a list of all of the equipment I use.

So before I start talking about each, I should mention that I don’t always use all of these things depending on my needs and weather conditions are the time.  That said, lets talk about each piece of equipment that I use.

This is the actual telescope/optical tube that I use.  Its great for looking at items around the solar system as well as deep space objects like star clusters, galaxies and nebulas.  It gives a really nice image although there is a tiny bit of coma which is why many astrophotographers opt for the EdgeHD version of the C9.25 but when I bought the scope I was being cheap.  Thankfully the effect is pretty minimal so its not a huge deal and I can typically crop off the edge of the images anyway.

This would be the mount that my telescope sits on.  Its not the greatest in the world but I find that as long as long as the telescope and all the accessories are well balanced it does a pretty good job.  It has a weight limit of 30 lbs which I am really pushing so an upgrade to a larger mount might be in the future but it does a good job for now after I upgrade the firmware and figured out how to properly balance it.  I haven’t tried to push my exposures past 5 minutes due to light pollution but I am assuming I can get considerably longer exposures with this mount.

Aligning the telescope every time I take it out is a pain in the butt and it was not very friendly on my knees so I got a StarSense Auto Align for my telescope.  Its basically a special webcam that sits on top of my telescope and works with its matching hand controller (much better than the stock hand controller that came with the telescope) that can do all of the aligning for you in a couple of minutes which is a lot faster than doing it by hand an it takes a lot of the guesswork out of the process.  It makes polar aligning a bit easier and faster than before but its not ideal so I plan to supplement this with a PoleMaster polar alignment scope soon.  It definitely speeds up my setup though so I’m happy with it!  It does a great job of putting what I want to look at right in the middle of the eyepiece every time.

Poler aligning the telescope every time I take it out is a pain in the butt and it was not very friendly on my knees so I got a QHY Polemaster for polar aligning my telescope.  Its basically a special webcam that sits in the polar scope part of the mount.  When combined with the super simple software that it comes with, I can get a really precise polar alignment to make for the most accurate tracking possible with my telescope.  And the best part is it only takes like 2 minutes to do!  This has really improved my polar alignment and thus the quality of my images and it is a huge time saver compared to using a normal polar scope or the polar alignment routine in my hand controller.

The focus knob that comes stock on the telescope isn’t bad and its perfectly fine for visual observing but when it comes to astrophotography, its best to have a fine focuser that makes it much easier to get perfect focus for imaging.  It still has a coarse focus knob so you can use it like the old focuser but it includes a microfocuser at the end of it that allows you to make much finer adjustments to get perfect focus.  Its definitely handy!

Taking the human touch of out anything that you need a good level of precision on is always the best way to go which is why I decided to motorize my focuser using the Sesto Senso robotic focusing motor from PrimaLuceLab.  This handy robotic focuser has a much finer touch than I do so I can do really precise adjustments to the focus and it has a temperature sensor that can be used to adjust the focus as the temperature changes throughout the night.  This is also a big step in being able to automate the operation of my telescope so I can use it while I am in the house rather than out with the telescope.

If you are going to be shooting exposures longer than 30 seconds you need an autoguider (unless you have one of those $30,000 mounts that is so good it doesn’t need it) and this is my autoguider of choice.  Its not too expensive and seems to do the job just fine without adding a ton of weight to my setup which is important since I am already pushing the limits of my mount.  Its basically a tiny scope with a webcam attached designed for picking up stars and it gives small adjustments to your mount to keep the star from moving so you can take long exposures and not end up with stars trailing through the image.  It works great when paired with the PHD2 software.

This is one of those things that I haven’t really started using until recently.  I haven’t got around to properly aligning it so it works for getting me in the rough neighborhood for polar alignment but its not exact by any means and I still have to use the hand controller’s polar alignment routine to get a good polar alignment.  It gets me one step closer though but as mentioned above, I plan on replacing this with a PoleMaster polar scope when funds allow which is a LOT more accurate.

When I want to cut down on my exposure times and get a slightly wider field of view, I use this focal reducer to reduce the focal length of my telescope and speed up my telescope.  It gives me a little wider field of view but not enough to shoot really large objects like the Andromeda Galaxy or the Rosette Nebula.

It always seems to surprise people when I tell them that I shoot my images with an outdated, discontinued old Canon Ti1 DSLR.  Its not the greatest camera by any means and I hope to replace it with a CCD in the future but it does a good job for now, especially since it is modified for astrophotography which allows the reds to pass through to the imaging sensor rather than filtering them out.

Since the telescope needs power to run as well as my other accessories like the Dew Heater, the Celestron PowerTank does a pretty good job of keeping me powered up throughout the night.  If I am using my dew heater, it really runs down the battery fast and I don’t get quite the amount of imaging time I would like but otherwise the battery lasts all night easily.  It also has USB ports which can be handy for charging devices like my phone!  The only bad thing is that it seems to take an eternity to charge (close to 24 hours if its run down completely).

At one point my nights of imaging were cut short by dew starting to form on the optics of the telescope but thanks to using a dew shield, that is no longer an issue.  Under extreme cold I will pair this with a dew heater since even this will frost over but I try to avoid that because its such a tight fit, getting it on with a dew strap is a real pain in the butt!  But thankfully with most cases I don’t have to pair the two together.

This is what I use to control the dew heater straps.  It supports up to 4 dew heater straps but I currently only have and need two, one for the telescope itself and one for the guide scope which can collect dew easily.  I can also control how much electricity is flowing to each so that I don’t use more than I need.

Dew Heater straps for both the telescope and autoguider

As mentioned, I have two dew heater straps which prevent dew from forming on the front of the telescope and the guide scope.  I only bring them out and use them on colder nights when they are necessary just so I don’t have more cords to deal with.

Thanks to all of the accessories on the top of my telescope (autoguider and autoalign), I need a small weight to balance out the scope when pointing at the zenith, otherwise the telescope starts to move on its own and you don’t want that!

Anyway, that is my setup as it sits right now.  I have some upgrades planned in the future including an autofocuser (which I’m looking to custom build), a PoleMaster polar scope among other things but as my setup evolves I will try to keep this post up to date for those interested in the telescope I use to capture my great astrophotography shots.