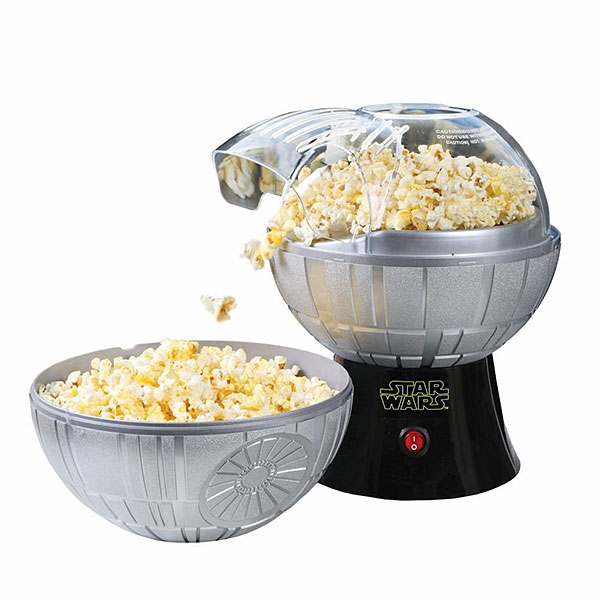 When it comes to popcorn, I can’t say I eat it very much since I hate the kernels getting stuck in my teeth but when I do eat it while watching a movie or something, I tend to do things the lazy way and just pop a bag of popcorn.  However, for the Star Wars fans out there that prefer to pop their own popcorn so that its made the way they like it, I have found the popcorn maker you are looking for!  Nothing says lets have a Star Wars marathon quite like a Star Wars Death Star popcorn maker!

The awesome folks over at ThinkGeek are selling this cleverly designed Star Wars Death Star popcorn maker for just $49.99!  This officially licensed Star Wars Death Star popcorn maker makes popcorn with hot air (thermal exhaust) rather than oil or butter which is a lot healthier since you don’t have that extra added fat and calories.  It also takes 1/2 cup of unpopped kernels which yields about 8 cups of popcorn in case you are wondering how much popcorn this can make.  So if you want the Force to be with your popcorn making, this is the popcorn maker for you!  Oh, and the top cover of the Death Star also acts as the perfect bowl!

So, who is ready for a Star Wars marathon now?

Let me know in the comments below how you like to make your popcorn?  Do you prefer bags, stove popped or to pop your own like with this Star Wars Death Star popcorn maker?  Also, do you add anything to your popcorn to make it taste even better?  I’d love to hear about your delicious popcorn recipes in the comments!