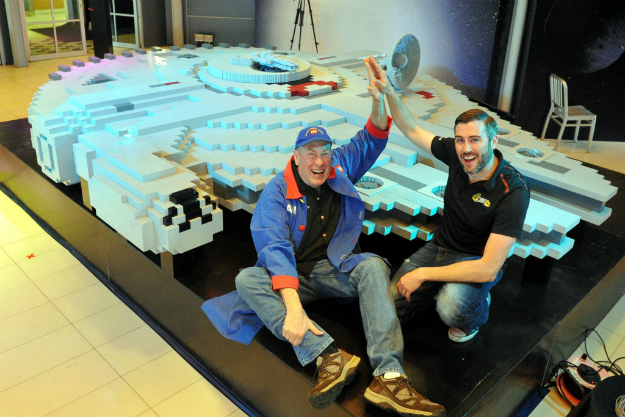 Like most kids, I grew up playing with LEGO but other than things like small buildings or vehicles or something, I never made anything truly impressive.  I suppose I never had enough bricks to make anything really impressive and LEGO is crazy expensive so its still not a hobby I could afford but I suppose if you work at one of the Legoland places, cost isn’t much of a factor.  And thanks to it not being a factor, today I bring you the world’s largest LEGO Millennium Falcon!

The final build looks a bit pixelated and like it belongs in an 8-bit video game but it still looks really cool!  And its freaking huge!

The video below shows the construction of the world’s largest LEGO Millennium Falcon and a bunch of kids building it and the LEGO Master Builders talking about the project.  There is even some LEGO juggling thrown in there too if this build wasn’t already cool enough!

Have you ever built anything impressive like this out of LEGO bricks?  If so, I’d love to hear about it and see some pictures in the comments below!

If this has you wanting to see more geeky LEGO builds, just search for LEGO in the search box on the right to see all the other incredible builds I have featured over the years!