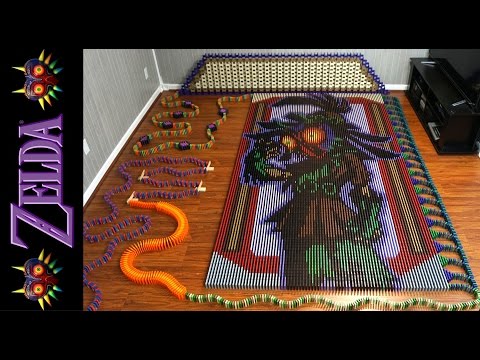 Even as a kid, my patience for building things with dominoes was rather limited.  I enjoyed setting them off and watching them fall but accidentally knocking one over and seeing all your work go down the drain prematurely was quite defeating.  However, luckily there are guys like TheDominoKing that are good enough that they can make insane masterpieces with dominoes like this Legend of Zelda Majora’s Mask dominoes run made with 67,507 dominoes!

Back in November, I posted TheDominoKing’s Legend of Zelda: Wind Waker dominoes run made with 78,175 dominoes and you guys seemed to be blown away by it so when I saw that TheDominoKing (who is truly the king of dominoes) had made another Zelda themed dominoes build, I new I just had to share it!

This Legend of Zelda Majora’s Mask dominoes build features a number of iconic figures from the game including Deku Link, Tatl, and Tael and it finishes off with an incredible Skull Kid finale!

This Legend of Zelda Majora’s Mask dominoes run was made with 67,507 dominoes and it took him about three weeks to complete it.  Talk about putting in a lot of time and dedication to making this incredibly Legend of Zelda Majora’s Mask dominoes build!  I really wonder how many times a domino got knocked over and he had to reset everything?  I suspect that tears were shed in the creation of this amazing domino build.

If you have ever done anything this epic and geeky with dominoes and happen to have video of your incredible build, let us know in the comments below because we would love to share it with the world!

That makes me wonder, do kids today even know what dominoes are?  I feel like my generation may have been the last one to really play with them because besides videos like these, you never hear about them anymore like you once did.