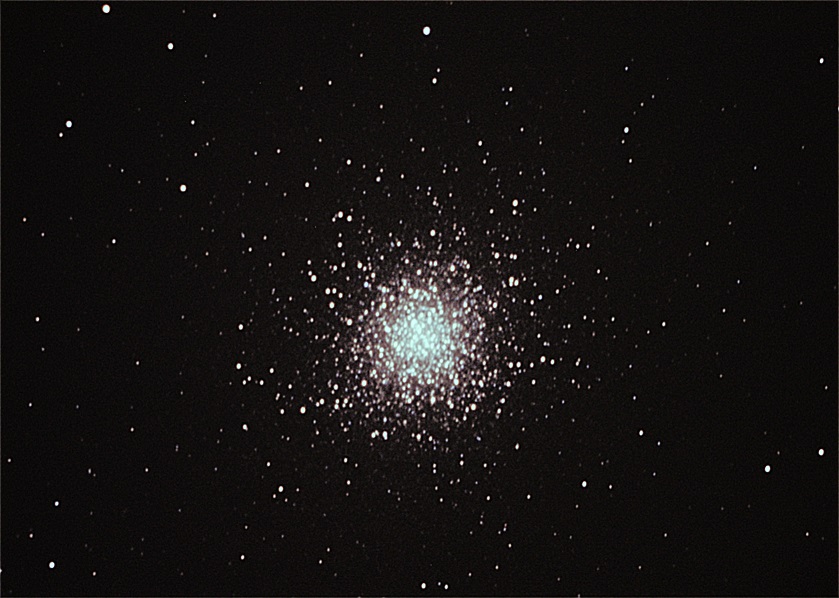 On Saturday night, I had enough of a clear sky (still lots of clouds) that I was able to take my telescope out for a little while.  Normally, I would work on photographing some planets but now all the ones that are easy to photograph are in a spot I can’t really see from my backyard and due to light pollution from the state fair, I was unable to shoot Pluto like I’ve been wanting so I ended up giving a little deep sky astrophotography a shot.  M13, the Great Globular Cluster in Hercules is a pretty common first target for those getting into astrophotography and since it seemed in a perfect spot (minus some passing clouds), I decided to take a shot at imaging it, especially since its my first ever attempt at photographing a deep sky object.

For a first attempt, I have to admit that I am pretty happy with it.  I know I have a lot to learn when it comes to shooting and processing deep sky objects but for a first attempt, I don’t think I could have expected anything better.  As I learn more and get the proper tools for processing the image, I may take another shot at processing it to see what I can get but I’m still proud of this image.

For those wondering about the beautiful globular cluster known as Messier 13, the Great Globular Cluster in Hercules, here is some quick facts about it.

Messier 13 (M13 for short), is also designated as NGC 6205 and is often called the Great Globular Cluster in Hercules or the Hercules Globular Cluster, which can be found in the constellation of Hercules.  It was discovered by Edmond Halley in 1714 and then later cataloged by Charles Messier (hence the name Messier 13) on June 1, 1764.  The cluster consists of approximately 300,000 stars, measures 145 light-years in diameter and is about 25,100 light-years from Earth.

Here are the details of my setup that I used for capturing the image: