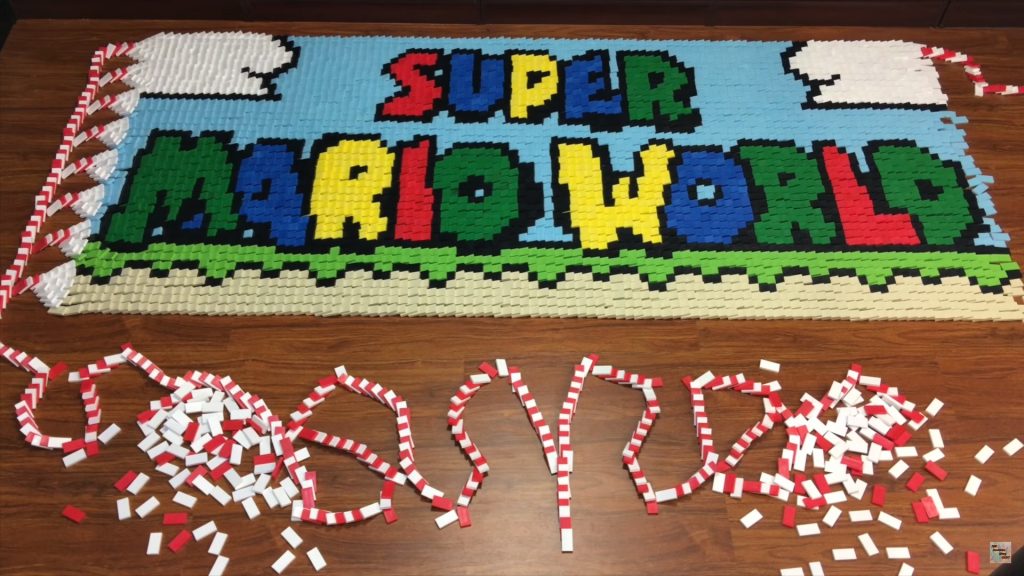 This Super Mario World dominoes reaction will surely impress every Nintendo fan.  And if it doesn’t, that’s probably because they are dead.

Although I have posted some pretty cool domino creations in the past like the 30,000 domino Nintendo build, I feel like dominoes has become a bit of a lost art.  Do kids even play with dominoes anymore?  When I was a kid, not only did I play video games but I played with dominoes a lot too!  I don’t think there is anything quite like dominoes when it comes to giving you a whole range of emotions from complete happiness when everything goes perfect, to total rage when the reaction begins before it’s supposed to.

Well, YouTube user TheDominoKing clearly still loves his dominoes as well as Super Mario World because he strung together this series of Super Mario World dominoes reactions into one long video which features 81,032 dominoes!  While each scene was filmed separately, the videos are stitched together to make it look like one epic Super Mario World dominoes reaction.  It features most of the classic SNES game’s characters and even the ending credits scene.  While the entire 5+ minute video is mind blowing and worth watching every second of, I think the Bowser at the end is especially impressive.  The sheer scale of it is massive!

I don’t know how much time it took to make this or how many times he had to reset after accidentally knocking a domino over but the result is clearly worth every bit of time and frustration.  This guy clearly has a talent for making incredible works of domino art!

If you have ever played Super Mario World, you are sure to love this video!