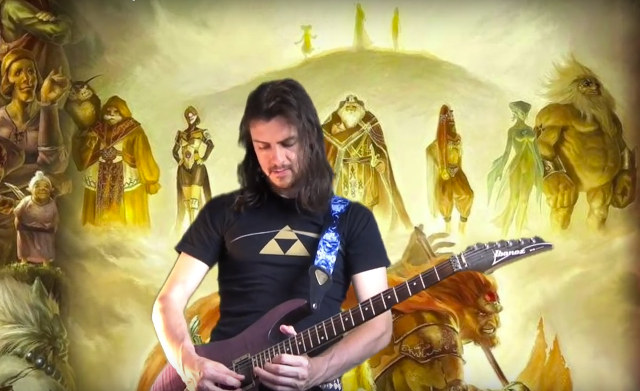 At this point, I think most of the readers of Global Geek News that have been around for a while pretty much know that metal is my favorite kind of music which is why I tend to post some geeky metal music whenever I happen to stumble across it.  Well, when I came across this amazing metal Zelda music medley, I knew that I just had to share it because it absolutely made my day and I figured it would make the day of other Zelda fans and metalheads out there.

The musician Sbeast is the amazing guy performing this incredible metal Zelda music medley.  The Zelda medley is very well put together and everything seems to flow perfectly.

A couple of weeks ago I saw the Legend of Zelda symphony performed in Denver and if there is one thing that would have made it better its if this awesome guy was performing this little medley on stage with the orchestra.  Actually, I think I would almost prefer going to a metal Zelda concert.  With as good as the metal versions of these Zelda songs are, I think it would be pretty great to hear more metal Zelda music and it would make for a pretty great concert.  I love the symphonic version but being able to headbang to Zelda music would be pretty sweet!

If you like this awesome video, you might also want to check out the Legend of Zelda theme song rock/metal cover I posted about a few years ago.  I think this is better but it still quite awesome and worth watching.  And if you see any other great geeky metal covers like this, make sure to let me know because I want to see it and post about it!