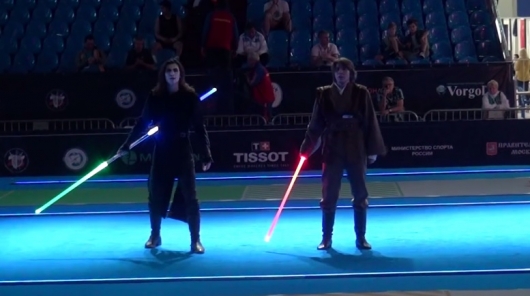 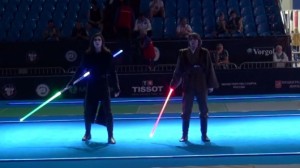 While I can’t say that fencing is a sport I have any interest in, if fencing competitions around here featured an epic Star Wars lightsaber duel like the one in the video below, I’d actually go to a competition!

The video below was taken at Fencing Senior World Championships Moscow 2015 and it features an incredibly well choreographed Star Wars lightsaber duel.  YouTube User Casual Stormtrooper added some much needed sound effects and music to give this battle a real Star Wars feel.

I have no say in casting for the next Star Wars movie but I would say if JJ Abrams is looking for a couple of guys that can pull off an incredible lightsaber fight, he should definitely hire these two!

If anybody knows who these two guys are, let me know in the comments below so they can get the credit they rightfully deserve!  I can’t even imagine the amount of time they had to put into this lightsaber fight to make it come off looking so smooth.  Outside of the movies, this is definitely the most entertaining Star Wars lightsaber duel I have ever seen!

The only disappointing thing about this video is the lack of people in the audience.  For a world championship competition, I would think there would be a lot more people in the stands.  I bet if they advertised this lightsaber duel, they would have had a much bigger turnout too!  At least these guys still got the attention they deserved since this has become a viral video.  Although I suspect few people have much interest in fencing because things happen so fast you can’t tell what happened.  I’ve watched a few matches on tv and if it wasn’t for the announcers telling me, I would have no idea who touched who where.