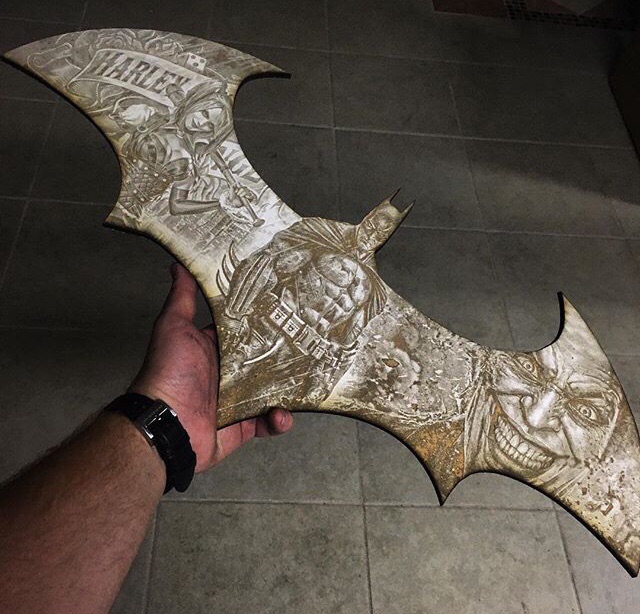 Ever since I was a kid, I thought it would be kind of cool to have a Batarang but never did I imagine I would see one this cool much less be able to buy it!  I’ve seen some pretty impressive works of Batman art before and I’m sure I’ve posted a few on here in the past but this Batarang wood engraving takes the cake!

Etsy seller FFCreativeImagery is the creative genius that is selling this spectacular Arkham series inspired Batman Batarang wood engraving for just $40!  It is made of .25″ thick white wood and measures approximately 9″x22″.  Not only does it feature Batman but it features Harley and Joker too!

The level of detail on this wood engraving is absolutely incredible!  I also love how they used Batman’s head to be the head of the bat in the Batman logo.  Clever things like that make it even more spectacular.

If you are a Batman fan, especially of the Arkham video game series, this Batarang wood engraving for you!  Or, if you know somebody that loves the games, you might consider this as a Christmas gift as Christmas is just over a month away!

Also, check out the rest of FFCreativeImagery’s store because he has a bunch of other really amazing stuff like this ranging from Batman to Star Wars.

Now the real question is, where am I going to find room on my walls to hang one of these Batman Batarang wood engravings?  My walls already have too much stuff on them but I suppose I could start using my ceiling to hang stuff like this.  Which leads me to the question, what geeky things do you have hanging on your walls?  Let me know in the comments below!