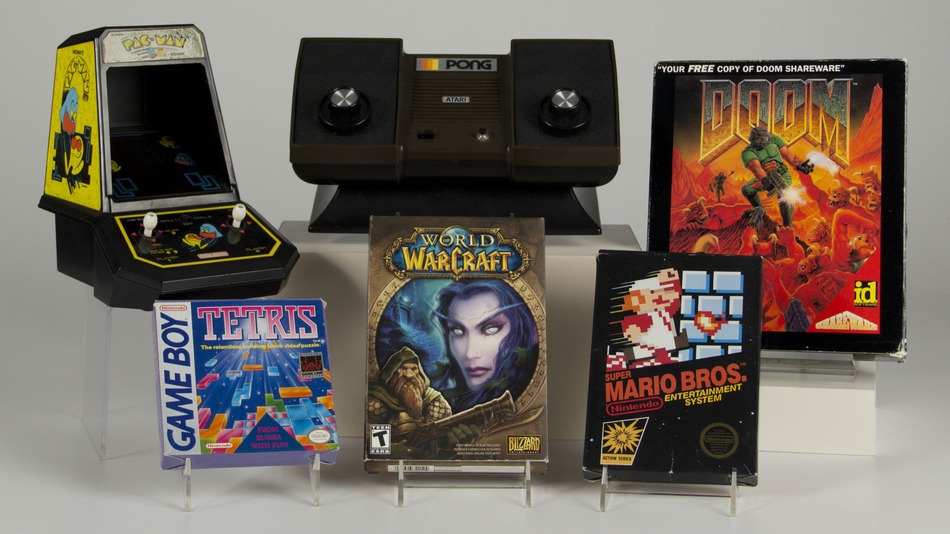 For a long time, I have thought there really needs to be a hall of fame for video games and I couldn’t be more excited that there finally is one!  I’ve been playing video games for 26 years and there are a ton of video games that are deserving of being in the hall of fame.  However, in choosing the inductees for the first entrants into The Strong’s World Video Game Hall of Fame, two giant mistakes were made.

Before I start ranting, I suppose I should list the inductees for The Strong’s World Video Game Hall of Fame.  This years inductees are Pong, Pac-Man, Tetris, Super Mario Bros, Doom and World of Warcraft.

The complete list of candidates for this years video game hall of fame induction included 15 games and here is the list:  Angry Birds, Doom, FIFA, The Legend of Zelda, Minecraft, The Oregon Trail, Pac-Man, Pokémon, Pong, The Sims, Sonic the Hedgehog,Space Invaders, Super Mario Bros., Tetris, and World of Warcraft.

Now, while I certainly see every game in that list as ones belonging in the video game hall of fame, there are several that absolutely don’t belong in there for the first round, including one of the inductees.  Which ones you ask?  I don’t believe that Minecraft, Angry Birds, and World of Warcraft (one of the inductees) have absolutely no place in there in the first round.

The first round round should be all about the early video games that paved the way for the rest of the industry.  That said, Pong, Tetris, Super Mario Bros, and Doom all belong on the list of inductees, but World of Warcraft certainly does not.

Before I start on why World of Warcraft should not have been considered much less inducted, lets get a smaller nitpick out of the way.  You probably noticed I didn’t mention Pac-Man in the list of games that belong on the list of inductees and there is a reason for that.  The reason is that I believe it should be Ms Pac-Man.  Ms Pac-Man is the version everybody remembers and you are still likely to find in an old pizza parlor or two around town with people still playing it.  Pac-Man was never the hit that Ms Pac-Man became so for that reason, I think it is less deserving of the honor than Ms Pac-Man.  Its really not a huge deal but in this case I think the wrong game in the franchise was credited with the honor.  Now, as for WoW…

Has it had a big impact on the industry?  Yes.  Does it deserve to be in the hall of fame at some point?  Absolutely!  However, I don’t think any game that is still in active development has any business in the hall of fame similar to how football stars have to be retired for at least 5 years before they are even eligible to be considered for the hall of fame.  To make it into the hall of fame, a game should be finished.  No more patches, no more expansions.  And honestly, it just doesn’t feel old enough anyway to really be considered yet.  Its a good thing Angry Birds didn’t get in because I would really have a fit about that!  I think the first round of games should stick to 8-bit graphics or at least no better than 16-bit (I probably would have been ok with Sonic being inducted).

So of the list of games that were considered, who do I think was most deserving to take the spot that was given to WoW?  I’d have to go with The Oregon Train.  I’m sure that it surprises many of you that I didn’t go with the Legend of Zelda since you all know I’m a huge Zelda fan but while I love the game and certainly think it belongs in the hall of fame, it has become overshadowed by better games in the franchise like Ocarina of Time so while it paved the way, I think the lack of attention it gets today makes it more of a second round inductee than a first one.

Why did I go with Oregon Trail?  I went with it because it was kind of that one game for a generation where everybody played it and knew about the game, mainly because it was played in schools.  I have some great memories myself of playing it in elementary school.  And, while the reboots were great fun, everybody remembers the old DOS version the most so I find it to be the most deserving in the franchise.  Ultimately, I think the game probably taught me more about what it was like in the early days of the USA than any class lecture I ever had.

So, in conclusion, whoever thinks that World of Warcraft is more deserving to be in the first class of The Strong’s World Video Game Hall of Fame over The Oregon Trail needs to lose all their food when their wagon sinks while trying to float across a river, get bit by a rattlesnake and then die of dysentery.

What do you think?  Let me know in the comments below!