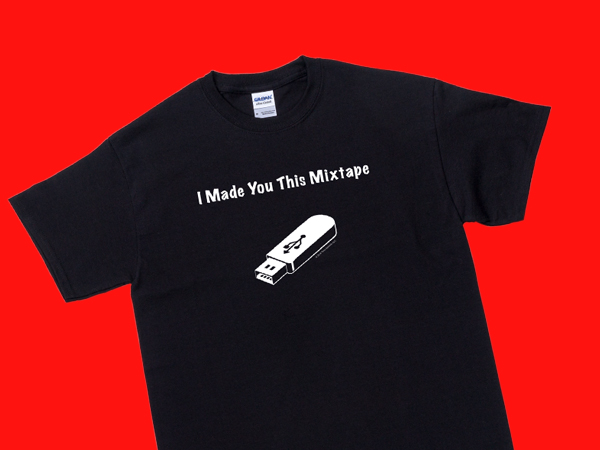 I remember that giving somebody a mixtape used to be a big deal back in the days of cassette tapes although I can’t say I ever made one.  I suppose the closest I ever came to doing something like that was to burn some CDs of various songs for my long road trips to and from college.  It really helped pass the time on those 9 hour drives but since I kept those CDs to myself, I can’t say I have ever had the experience of giving somebody a ‘mixedtape’, especially since that seems to largely be a romantic gesture and I have always been single.  Anyway, in modern times, apparently mixtapes now take the form of USB drives and I found this cool shirt to inform me of that because I honestly thought the idea of a mixtape had died long ago.

The awesome folks over at Tshirtbordello are selling this funny ‘I made You This Mixtape T-Shirt’ for just $14.99!  If you are one to show your love with USB drives full of music (which I’m sure you purchased legally, right?), then I think this shirt might just be for you!  Or if you just want to make fun of people that do that and still call it a mixtape even though there is no more cassette tapes involved, this would be a good shirt for you too!  Although calling it a mixed USB drive just sounds weird so until a new term is invented (feel free to suggest them in the comments below), perhaps still using the word mixtape can be forgiven.

Share this with any mixtape makers you know!  Also, if you have an Amazon Kindle like I do and you want to help support us, subscribe to Global Geek News on the Kindle!