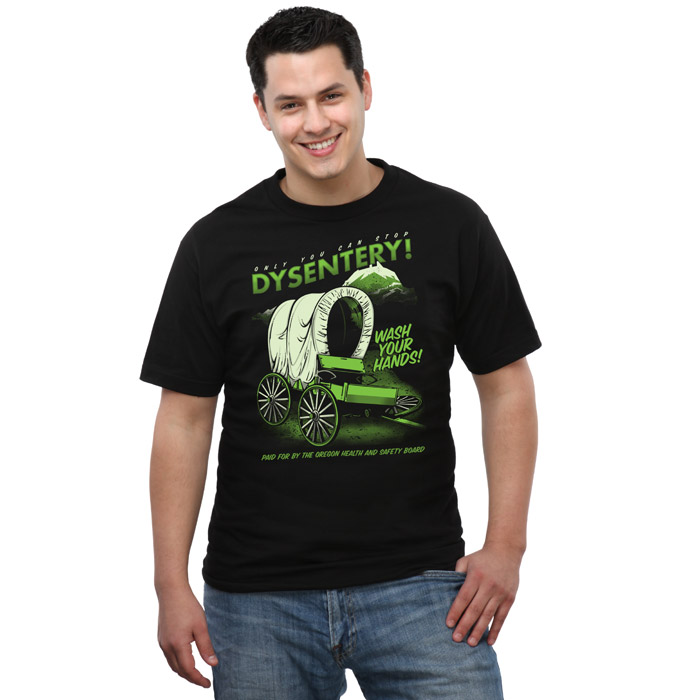 Although I still occasionally watch a guy known as MonotoneTim (he is hilarious and has an amazing voice) on Twitch play Oregon Trail II, it has been far too many years since I have played any of the classic Oregon Trail games.  I always loved playing them as a kid and occasionally I still get some of the music from Oregon Trial II stuck in my head (right now happens to be one of those times).  However, for as much as people used to love the games, it doesn’t seem like they get much love from the merchandise world.  In the past, I posted about a cool You Have Died of Dysentery t-shirt and I bought a shirt from Woot (I think) that says something like ‘I blazed the Oregon Trail and all I got was this lousy t-shirt and dysentery’ but until now, I think those were the only two Oregon Trail shirts I have ever seen.  Well, now I have found an awesome third one and it is on sale for half price!

The amazing people over at ThinkGeek are selling this Oregon Trail ‘Dysentery Awareness’ t-shirt for just $9.99 right now!  That is half of the normal price!  It is a little hard to read in the picture below but it says ‘only you can prevent dysentery’ on the top and ‘paid for by the Oregon safety board’ on the bottom.

If you grew up loving Oregon Trail like I did, you should get one of these amazing shirts before the price goes back up!