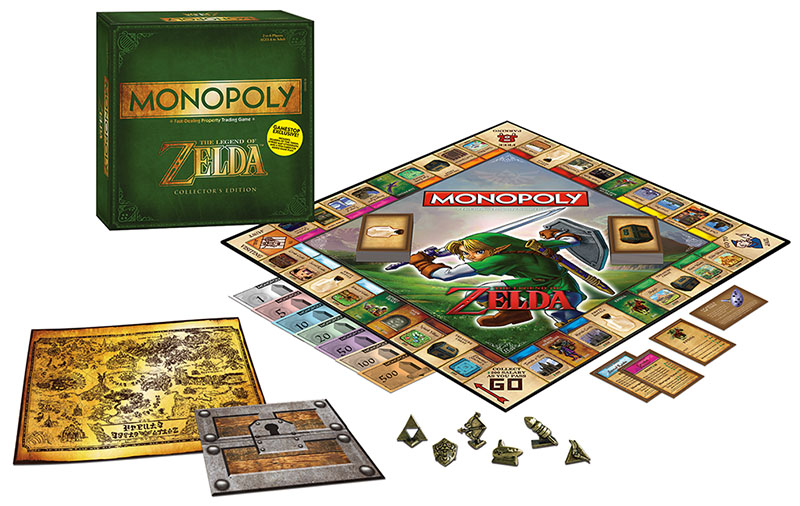 Monopoly was always my favorite board game as a kid and I still play it on my mobile devices occasionally but I’ve never really done much with the novelty editions.  Sure, there are some cool ones that I would like (the Klingon version is one example), but they aren’t available on the digital versions and since I rarely have the opportunity for tabletop gaming, I just never bother with them.  Even so, I still like sharing news about geeky versions that fans have made (ex: Red Dead Redemption Monopoly, Final Fantasy Monopoly and Fallout Monopoly just to name a few) and official ones like the Klingon version I mentioned a second ago.  In the case of this post, I wanted to let everybody know a Legend of Zelda edition is about to come out!

Starting September 15, 2014 you can buy a Legend of Zelda version of Monopoly exclusively from GameStop for $39.99 (you can pre-order it now).  This is created by USAopoly who makes all of the novelty Monopoly games.

The picture below gives you a taste of just how good this looks but if you want to see more pictures of the board, the box and the tokens (Triforce, ocarina, bow, Hylian shield, boomerang and hookshot) check out the product page linked above and below.

So Zelda fans, will you be getting this Zelda edition of Monopoly?  Let me know in the comments below!

Share this with any Legend of Zelda and Monopoly fans you know!  Also, if you have a Kindle, subscribe to Global Geek News on the Kindle!