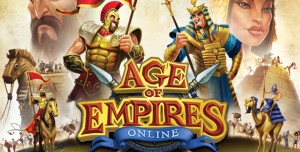 When video game companies shut down the servers for their games, it generally doesn’t bother me too much (unless we are talking about the greedy smacktards at EA who like to kill multiplayer servers after just a year or two for some games) largely because even though the multiplayer may be dead, at least those who purchased the game can still play single player or local multiplayer.  Unfortunately, the more games move toward a massive multiplayer experience, the less possible that is and I would like to take a few moments to talk about one such great game that is being shut down this week (July 1st, 2014 at 4PM PST for those wondering) and that is Age of Empires: Online.

Like many PC gamers, I grew up playing Age of Empires.  I still remember in the mid to late 90s hogging my grandparents phone line for hours at a time because I wanted to play Age of Empires with my friends from school.  Whether we were seeing who could out cheat code the other person or just doing a normal game, it was one of my most enjoyable memories from childhood.  Of course, as time went on, I moved on to Age of Empires II, then Age of Mythology and Age of Empires III and most recently, I have loved playing Age of Empires: Online.

While I’m sure many true Age fans probably followed the same path through the Age franchise, my story becomes a bit different with Age of Empires: Online which has made it a very special game for me and that is the story I want to share with you today.  With the game shutting down completely tomorrow, I decided to share my story as a tribute to the game.

To begin, I honestly never cared that much for Age of Empires III for a variety of reasons ranging from the weird shipments mechanic to the spawning of groups of troops however I still played it once in a great while.  It never felt like people enjoyed it as much as the older Age games because it was so different from the previous games even though it was really pretty.  After that, I wasn’t sure there would ever be another Age of Empires game (or if I wanted to play it if it included those same elements from Age III that I didn’t like) when Microsoft shut down Ensemble Studios, the developers that made all of the Age of Empires games up until that point.

While I always loved the older games, I rarely played them much after Age of Empires III and spent most of my RTS gaming time playing the various Command & Conquer games.  I certainly longed for a new Age game but I never thought I would see one.

Then, one day I was checking my e-mail and out of nowhere, I got an e-mail from Microsoft inquiring about if I might be interested in helping out with the beta for an upcoming game.  I was a little surprised by the e-mail as I knew I had signed up for something from Microsoft quite some time before that saying I was interested in future game betas but I had never received any e-mails about betas and after that e-mail, I have never received another one.  After reading the e-mail and signing my life away with their NDA, a short time later I got to check out this ‘Project S’ aka ‘Project Spartan’.  At that point, it was still in alpha and I think a few weeks away from beta but I installed their Games for Windows Live client, downloaded the game and fired it up.  After the build was updated, I finally got into a game and started to check out the campaign quests.

With my excitement, I was playing the game at any opportunity I had and since I wanted the game to be the best that it could be, I was often submitting dozens of bug reports a week if not a day.  The game was definitely rough in those very early days with missing building textures, pathing problems, and a whole array of other issues but with each new build we were given, those problems were fixed and things got progressively better until it ultimately turned into the incredible game that it is today.  Of course the path to greatness was not always easy as they did have to reset our civilizations a number of times which meant everybody lost all of the progress they had made (quests completed, our level, gear that we had earned, ect.) which was beyond frustrating and annoying but in the end, I understood it was necessary and for the games benefit.

Of course the early days weren’t all just about playing games and submitting bug reports, there was also a message board set up for those in the alpha/beta to discuss the game, talk about problems, suggest features, and interact with the developers.  The forums were always a great place to hang out and talk about the game (especially since we legally couldn’t talk about the game to anyone else at that point) and the community was fantastic!  As more were let into the beta, I think things felt a little watered down but it was still a great place to talk about the game.  However, it wasn’t all talking, that forum almost changed my life!

How did it nearly change my life?  During the beta, the developers posted about an open position on their balance team and being a huge RTS fan since 1995 and interested in an opportunity to work at Microsoft, I immediately inquired about it and exchanged a few e-mails which had be believing things looked REALLY good for me to get the position.  While things did sound really good and the developer I was talking to seemed really enthusiastic at the idea of having me on board, I was told I would have to go through one of the temp employment agencies they use and from there the formal interviews and stuff would get rolling.  Of course I had no objection to it at the time because I really wanted the job and having interviewed for positions at Microsoft before, I knew that was pretty much how things worked.  Unfortunately, the employment agency they pointed me toward stuck me with dealing with some lady that seemed like she was deliberately trying to sabotage my attempt to get the job and she ultimately screwed around long enough (for weeks) that I lost the opportunity for the job.

I was bitter about not even getting a formal interview because of the idiot temp agency lady for quite a while after that because getting to work on the Age of Empires team was a childhood dream of mine.  Eventually, I moved on to other things and quit dwelling on the situation and started enjoying the game again (that is not to say that it wouldn’t be real tempting to give that lady a swift kick in the pants if I ever happened to meet her in person).  However, it wasn’t until after the game launched that I found my real love for it.  Once all of the features and everything were out there and there were a lot of people to play with, I then realized just how great it was.  When the Age of Empires community team started going community challenge events on twitch on Fridays, I would always try to sneak in watching it at work because I was blown away by just how good and relatively well balanced the multiplayer gameplay was.  Watching those games with some of the best players in the community had me hooked.

Eventually, I started streaming myself and found it to be a fun experience which eventually led to me streaming games like CounterStrike: Global Offensive and others.  It is amazing what you can learn by watching the streams of others or them watching yours and critiquing your skills!

Well, sadly all good things must come to an end and it is the end of the line for Age of Empires: Online.  It has been one of my all time favorite RTS games and sucked up hundreds if not thousands of hours of my life.  It sucks to know that after July 1st, I will never be able to play this great game again.  It also sucks that I suspect I will lose some good friendships that I have made because of it as well.  I don’t think I have ever been this emotional about the shutting down of a game before but it is like a part of me and my life is dying.  I will truly miss it and I will always think of it fondly.

For those interested in checking out a couple of my games or want to see what this game was like if you never had a chance to check it out, below are two of the games I streamed on twitch this past weekend (I lost both games because even though I have spent a lot of hours on it, I am still not that great at PvP).