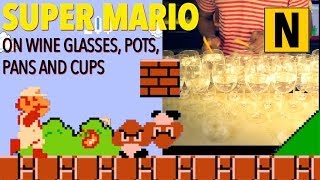 Like many people who grew up playing video games, I spent much of my childhood (and a fair bit of my time even to this day) playing Super Mario Bros.  Even if I am not playing it, whenever I hear the music, it always brings a smile to my face.  Whether the Super Mario Bros theme music is played on an ancient Chinese instrument or a violin (I’d link to that old post but it is kind of useless since the video has been taken down because the original poster had their account killed for posting copyrighted material), I can never get enough of that awesome music!  Well, now one guy decided to play it with a frying pan and a bunch of wine glasses!

YouTube Music maker Dan Newbie uses a couple of pencils, a frying pan and a ton of wine glasses to perform the Super Mario Bros theme.  It turned out really cool!

If you don’t feel like dropping whatever you are doing after watching this to go play some Super Mario Bros, you either aren’t a gamer or there is something seriously wrong with you.  That is exactly what I am going to do as soon as I finish writing this post!