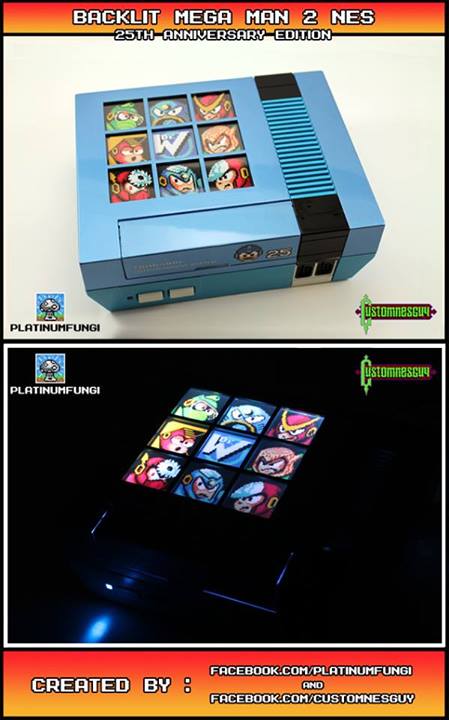 First of all, before I get start talking about this incredible NES mod, I want apologize to all of the loyal Global Geek News readers for having been largely MIA for over a month (I’ve still been pretty active over on our Facebook page).  Today is the first day in over a month that my head is finally clear of all the stuff that has been occupying my mind lately and I finally feel like myself again (yay for meditation!).  So hopefully things will be back to normal now so you can expect to see me posting awesome stuff again at least on Monday, Wednesday and Fridays like I had been.  Anyway, lets talk about an awesome console mod shall we?

In the past, I have featured several incredible NES console mods made by Ryan Fitzpatrick aka Platinumfungi including a fantastic Legend of Zelda NES console mod and a Mega Man console mod (which sold for $1,000 on ebay).  Well, he is back to his usual tricks with a new back-lit NES console mod based on Mega Man 2!

If you are a big Mega Man fan and are interested in owning this awesome console, you are in luck because you have that chance!  Like his last Mega Man console mod, this one is also up for sale on Ebay and the auction lasts until tomorrow evening.  Unfortunately, you are going to need deep pockets because this one is already going for $950.  If I had that kind of money to spend on an NES, I definitely would.  I think I am going to need to hit the lottery first and there are no lottery drawings around here until after the auction is over.  Maybe next time!  I will still continue to admire the pictures below of it though!