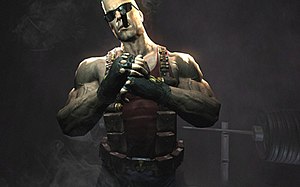 Duke Nukem Forever has been arguably the longest running joke in the gaming industry. The game was announced back in April of 1997 but has still never shipped which has urned the game the title of vaporware for well over a decade.  I’ve even seen pictures of pre-order receipts from GameStop dating back to 2001 floating around the internet in recent years.  If it wasn’t for the occasional screenshot or video clip surfacing, one might have figured the project would have died years ago. Luckily, the wait appears to finally be coming to an end.

According the the Duke Nukem Forever product page on Amazon, the game will be released on May 31, 2011.  As somebody who has been looking forward to the game since it was announced, I am glad the wait is finally coming to an end.    Waiting 5 more months is nothing as I have been looking forward to this game for nearly 14 years.  It may not be 3D Realms that ships the game but at least it is coming!  Thank you Gearbox!